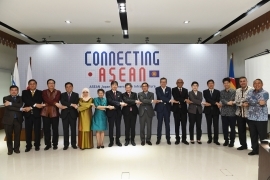 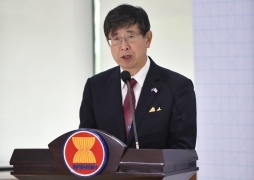 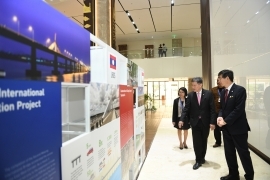 On 18 October 2019, the Mission of Japan to ASEAN, the Economic Research Institute for ASEAN and East Asia (ERIA) and ASEAN Foundation co-hosted the opening seminar of the photo exhibition on ASEAN’s infrastructures involving Japan, titled “Bright Future Achieved by Quality Infrastructure in ASEAN -Connecting ASEAN-” at the ASEAN Secretariat (ASEC). The exhibition will be held at the lobby of the new ASEC building until 1 November 2019.

Dr. William mentioned that in the construction and operation of the MRT Jakarta that was constructed through the partnership between Japan and Indonesia, Japanese companies provided not only technical support, but also ethical support including the management of working environment. In addition, referring to many examples and facts, he explained the MRT Jakarta’s impact on people’s lifestyle behaviors (e.g. lining up properly before taking a train, keeping the train and station clean) and its contribution to ASEAN.