Minister Ono’s participation to the Opening Session of Attachment Programme 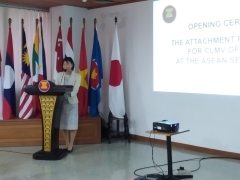 On October 4, Ms. Hikariko Ono, Minister, Deputy Chief of the Mission of Japan to ASEAN, attended the Opening Session of Attachment Programme(*) held at the ASEAN Secretariat, and celebrated the commencement of the training program at the ASEAN Secretariat for young government officials from Cambodia, Lao PDR, Myanmar and Vietnam (CLMV).  Attendees to the ceremony included H.E. Aladdin D. Rillo, Deputy Secretary-General of ASEAN for ASEAN Economic Community.

At the opening session, Minister Ono encouraged the participants by stating that the Attachment Programme is one of the most successful projects among many projects Japan has supported through the Japan-ASEAN Integration Fund (JAIF) and expressing her expectation for the success of this year’s training.

(*) Attachment Programme dispatches young governmental officials from CLMV to the ASEAN Secretariat for one year, with a view to enhancing administrative capacities of the participants and narrowing the gap between CLMV countries and other six ASEAN countries.  The program has produced excellent officials till now.  This year’s training marks the 16th Batch of Junior Diplomats and the 5th Batch of Government Officials from the agencies under the ASEAN Economic Community or ASEAN Socio-Cultural Community pillars.  The Government of Japan has supported the program through Japan-ASEAN Integration Fund (JAIF).