Lecture and demonstration of Japanese cuisine at ASEAN Secretariat 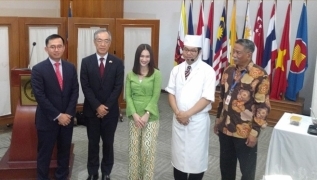 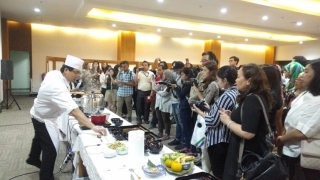 On 24 September 2018, the Mission of Japan to ASEAN held an event of lecture and demonstration of Japanese cuisine, focusing on “soba” (buckwheat) noodles at the ASEAN Secretariat in Jakarta, as a commemorative event to celebrate the 45th anniversary of Japan ASEAN Friendship and Cooperation.

Following by the opening remarks delivered by H.E. Mr. Kazuo Sunaga, the Japanese Ambassador to ASEAN, and other designated guests, Mr. Masato Tsuki, the chef of Ambassador of Japan to ASEAN, provided a lecture and demonstration about “soba”. At that event, demonstrated foods were provided to participants for their tasting, in cooperation with Mr. Kazumasa Yazawa, the executive Japanese chef of Restaurant Oku at the Hotel Indonesia Kempinski.

Approximately 150 guests, including H.E. Tran Duc Binh, the Permanent Representative of Viet Nam to ASEAN, as the country coordinator for Japan, and H.E. AKP Mochtan, Deputy Secretary-General of ASEAN, participated in the event. Also, Ms. Melody Nurramdhani Laksani, who was nominated as the Japan-ASEAN Goodwill Ambassador on Food and Agriculture, by the Japanese Government this year, took part in and brought excitement to the event.