The 17th Meeting of ASEAN Plus Three Tourism Ministers 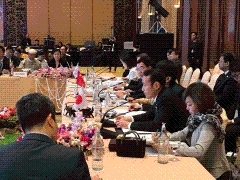 The 17th Meeting of ASEAN Plus Three (Japan, China and Republic of Korea) Tourism Ministers was held on 26 January 2018 in Chiang Mai, Thailand. Mr. Kazuo Yana, Parliamentary Vice-Minister of Land, Infrastructure, Transport and Tourism of Japan attended the meeting.

Japan reported its tourism policy under its tourism vision, the recent situation of foreign visitors to Japan in 2017, and cooperation for the expansion of two-way tourism between Japan and ASEAN. The ASEAN Tourism Ministers expressed their gratefulness to Japan for its support for ASEAN-Japan tourism cooperation activities, which include the Seminar on Accessible Tourism on 7 February 2017, Tourism Promotion Seminar on 28 March 2017, Mekong Tourism Award 2017 on 8 May 2017, and International Tourism Symposium on International Year of Sustainable Tourism Development 2017 on 15-19 October 2017.

The meeting adopted the ASEAN Plus Three Tourism Cooperation Work Plan 2018-2020 and the Joint Media Statement.