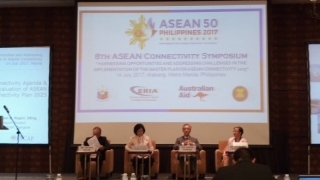 ASEAN adopted the Master Plan on ASEAN Connectivity (MPAC) 2025 at the 28th ASEAN Summit in September 2016. The MPAC 2025 is a key document to outline how to enhance regional connectivity for the next 10 years, thereby advancing ASEAN’s community building. This symposium aimed to discuss issues on the implementation of the MPAC 2025.

Ambassador Sunaga underscored the importance of promoting quality infrastructure investment, which include elements such as economic efficiency, safety, resilience, and environmental and social considerations. In addition, he spoke of the needs of capacity building for better operation. Taking an example of Noi Bai International Airport in Viet Nam which was constructed with financial support from Japan, he explained that the concept of safety management and quality control had been shared among more than 50,000 Vietnamese construction workers.

Points raised by other speakers included the importance of better coordination among relevant stakeholders and improvement of resource mobilization.